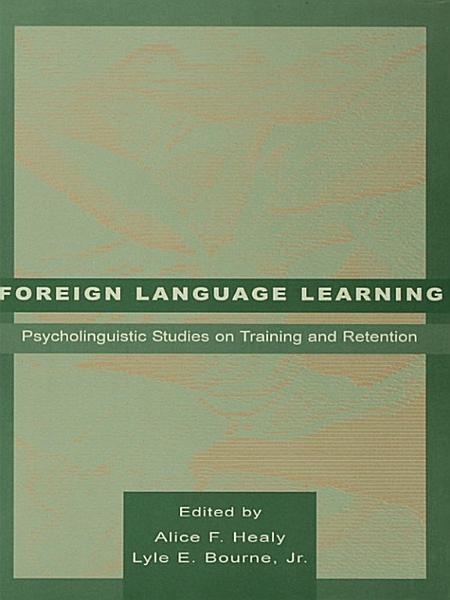 Based on a research project funded by the Army Research Institute, Foreign Language Learning reports original empirical and theoretical research on foreign language acquisition and makes recommendations about applications to foreign language instruction. The ultimate goal of this project was to identify a set of psychological principles that can provide the foundation for--or at least, argumentation for--a foreign language training course. This book reviews the various studies of which the project is comprised. It begins with an overview chapter outlining the scope of the project and summarizing some of the experiments that were conducted in the laboratory. In each of the following chapters, the contributors report on previously unpublished research on selected specific psycholinguistic training principles; vocabulary and concept acquisition; language comprehension; reading processes; and bilingualism. The final chapter--prepared by a prominent expert on second language training--provides an overview and evaluation of the contribution of the research described in earlier chapters to the goal of improving instructional methods in foreign language learning.

Sandwiched between the introductory and final chapters are four major sections:
* Vocabulary and Concept Acquisition, which discusses the effect of first-language phonological configuration on lexical acquisition in a second language, contextual inference effects in foreign language vocabulary acquisition and retention, mediated processes in foreign language vocabulary acquisition and retention, and the status of the count-mass distinction in a mental grammar;
* Language Comprehension, which addresses voice communication between air traffic controllers and pilots who are nonnative speakers of English, cognitive strategies in discourse processing, and the effects of context and word order in Maasai sentence production and comprehension;
* Reading Processes, which discusses the enhancement of text comprehension through highlighting, the effect of alphabet and fluency on unitization processes in reading, and reading proficiency of bilinguals in their first and second languages; and
* Bilingualism, which addresses Stroop interference effects in bilinguals between similar and dissimilar languages, the individual differences in second language proficiency, and the hierarchical model of bilingual representation.