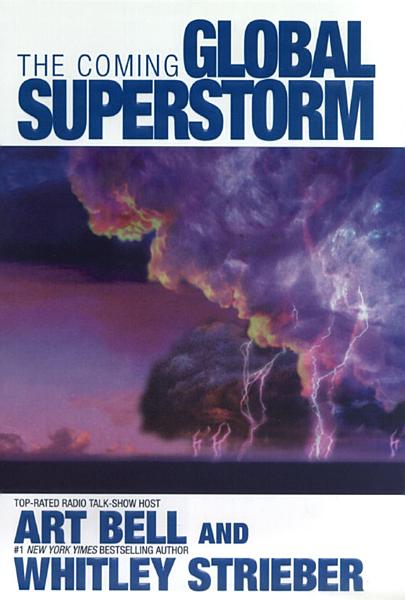 Killer tornadoes. Violent tropical storms. Devastating temperatures. Are these just the prelude to an unprecedented environmental disaster in our near future?
Two of America's leading investigators of unexplained phenomena -- Art Bell, the top-rated late-night radio talk-show host, and Whitley Strieber, No. 1 New York Times bestselling author of Communion and the legendary Nature's End -- have made a shocking discovery based on years of research with top scientists and archaeologists from around the world. Now, they reveal what powerful interests are trying to keep hidden: rapid changes in the atmosphere caused by greenhouse gases have set humanity on an incredibly dangerous course toward a catastrophic change in climate in the immediate future. It will begin with a massive, unprecedented storm that will devastate the Northern Hemisphere. This will be followed by floods unlike anything ever seen before -- or perhaps a new Ice Age. They also unearth evidence that this has happened in the past -- in fact, that it has occurred regularly throughout geologic history, but so infrequently that our only record of the last such storm is contained in ancient myths and flood legends.
From El Nińo to the African droughts, to the shrinking of the polar ice caps, Bell and Strieber identify the warning signs to those willing to see. They point out that the Earth's regulatory system is like a rubber band: you can stretch it just so far before it snaps back -- with a vengeance. Since 1995, each successive year has set new records for violent weather. In 1999 a major climatological study predicted that the Earth will soon be warmer than it has been in millions of years. Bell and Strieber tell us why they believe a rebound is imminent -- a rapid and violent cooling that will cover the Northern Hemisphere in a sheath of choking ice and snow.
But it's not too late to reverse our destiny. No mere harbinger of an inevitable doomsday, The Coming Global Superstorm is instead a spirited call to action that offers a wealth of viable solutions to this mammoth challenge to humankind. Through a careful and impressively researched dissection of the myths and legends of ancient cultures and an insightful examination of the best of modern environmental science, Bell and Strieber guide us on an intellectual journey as dark as the murky origins of man and as bright as the promise of an interstellar future.